A few months ago I visited Nokia’s factory in Oulu, a city situated in northern Finland,100 miles from the arctic circle. I was joined by a dozen tech journalists from publications of varied sizes to learn about Nokia’s plans to develop a commercial 5G network.

When launched, 5G will drastically increase the speed at which data is transferred. During the tour we met Nokia engineers who, expecting a number of questions about the intricacies and applications of the future network, were asked only one question by a group of supposedly hungry journos looking to tell the tale of this cutting edge technology: what is your gender policy?

The question had the effect of an insulin shot and immediately saw the drowsy group curiously flock towards one baffled engineer who, clearly caught off guard, was now forced to toss aside decades of engineering studies and comment on the hottest topic in tech journalism.

The question is indicative of the state of tech journalism today and undoubtedly the most talked-about company making headlines in the social context is the ride-hailing app Uber.

Indeed, the company has become an unwilling representative of male chauvinism in the tech word.

In 2015, an Uber driver in India was convicted of raping a passenger and more recently, a female Uber employee “alleged that Uber’s human resources representatives ignored multiple reports of sexual harassment and sexism”.

These are awful and deeply deplorable examples of human behavior.

However, considering Uber’s business model and relatively loose vetting of drivers and the on-the-go contract made between the driver and passenger, shouldn’t the company also be judged on the merits of its technology, competitiveness and market share? After all, Uber, and its competitors, have pushed prices down, killed taxi monopolies and injected much needed accountability to the relationship between the driver and the customer.

None of this seems to matter. Tech journalists tend to be young and in their world a company is only as good as its diversity score. The thinking is cult-like. Instead of asking about technology they ask about hiring policies and aspects that relate to social justice issues at the expense of judging the technology and its impact on society and economy.

Uber is controversial because tech journalists have decided that the company condones sexual misconduct, and consequently it has become a symbol of the perceived dark underbelly of the tech world.

While social issues are important, why should they dominate tech journalism? Why should we #deleteuber because of the allegations of one female engineer? Should we simply ignore the vast majority of the company that has not engaged in sexual misconduct? What about the thousands Uber has employed?

As a prime example of Uber-shaming, writing in New York Times, Dan Lyons laments Uber about a bro culture he says is plaguing many tech companies.

“Look at Uber, the ride-hailing start-up. It’s the biggest tech unicorn in the world, with a valuation of $69 billion. Not long ago Uber seemed invincible. Now it’s in free fall, and top executives have fled. The company’s woes spring entirely from its toxic bro culture, created by its chief executive, Travis Kalanick.”

By top executives, Lyons means Jeff Jones who apparently does not enjoy ego wars. A report in Recode refers to anonymous sources who apparently confirm – as if to preempt dissenting voices – that Jones’ departure had nothing to do with Kalanick’s decision to bring on a new COO to help Jones, but all to do with sexual harassment claims.

Both the Lyons column and the Recode story seem manufactured and manipulated towards a particular brand of truth – the bendable kind that is out to get Uber.

With all the brouhaha about the dark side of Uber, a recent Business Insider piece looked into the company’s revenues and found that Uber is actually turning a profit.

“Uber’s net revenue per quarter looks very positive. Net revenue is the cut Uber takes on each ride, which is roughly 20%.”

So much for free fall. 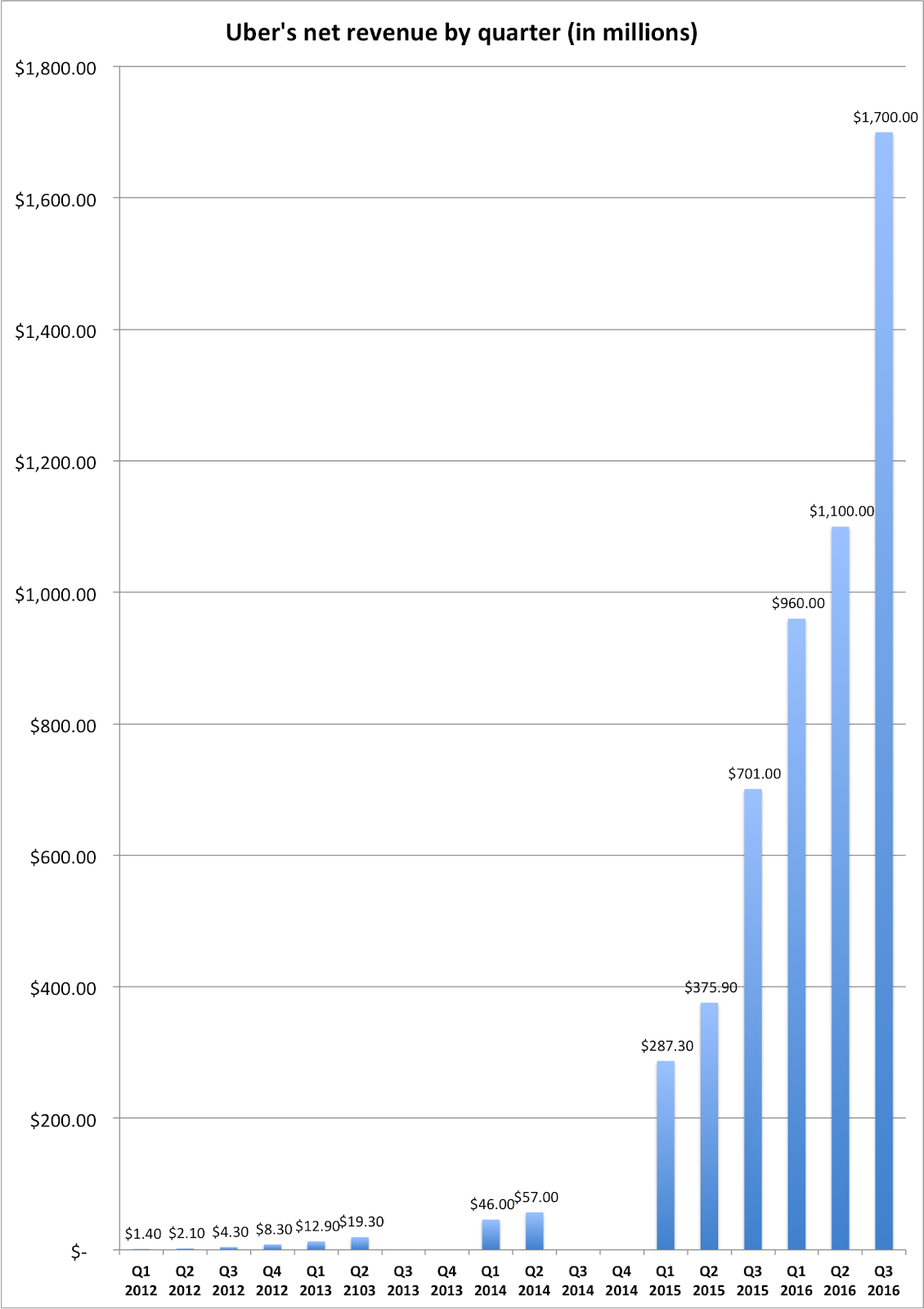 Of course not all numbers look great for Uber as the BI piece shows, but the truth is far from settled and it is simply inaccurate to suggest that Uber is doomed. Today, Uber is the most highly valued startup in the world with a valuation of $69 billion.

These are at best inconvenient facts for an audience of tech journalists uninterested in tech – or truth.